I live in Ottawa, the capital city, where 500,000 people are expected on Parliament Hill, to watch an all-day concert, starting at 9 a.m. Around noon, there will be a fly past of Canadian Military planes.  I always find this part very exciting. The jets come out of nowhere and fly fast and low.

Prince Charles and Camilla are here and I feel certain there will be a speech in there somewhere. Probably a couple more from Canadian government officials.

Security is tight this year, due to recent world events. There will be two entrance points to the Hill, and every one of those half a million people have to be scanned and have their bags searched. That is 250,000 per security post!

In front of city hall, a mobile hospital has been set up to deal with any possible medical problems, from heat stroke and overdoses, to situations requiring minor surgery. Apparently the EMTs will transport patients in golf carts, since dozens of downtown streets have been closed to traffic,

All across Canada there will be parties and flag waving followed by fireworks in the late evening.

Today I brought two of my grandchildren to the mall to buy Canada Day “stuff”. Everything is red and white. We got a frisbee, a cowboy hat, temporary tattoos, stickers, a baseball, cookies, cakes, a wind sock, cup-cake holders, pennants, and flags. Our house is decorated and I am sure when they got home, their house was next on the list. Everyone at the mall was smiling and you could just feel the excitement. 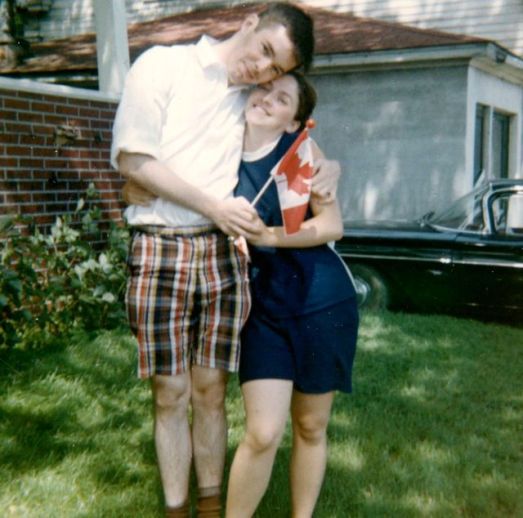 Here we are, married three days, and leaving for Montreal, en route to Zambia.

We were in Zambia in 1967 when we celebrated Canada’s 100th birthday, waiting for the birth of our first daughter a few weeks later.

Canada’s motto is “From Sea to Sea”.

From the Atlantic to the Pacific to the Arctic, Canada is a wonderful country. I pray that we will always follow the principles upon which our country was founded, back in 1867.

One cautionary note. On the 6 o’clock news tonight we were told that there would be plenty of bathrooms. There are 36 temporary toilets set up on Parliament Hill. I did the math. It works out to 13,888 people per toilet! I don’t care for those numbers. I am glad I am going to celebrate with family. There will be eight of us and two bathrooms. I prefer those numbers.

Our 13-year-old grandson with his Canada Day cowboy hat from Dollarama.

One day in Montreal.

It’s funny how a specific moment can tug on our hearts decades later. This little story goes back to another time, another place, and another family.

More than 40 years ago, we moved from Ottawa, to Montreal. I was eight and a half months pregnant the day we moved in and gave birth to our fourth daughter two weeks later.

A few months later, a new family moved in next door. They were originally from the Philippines and their children were close in age to our own. When they moved in, they had five children, and she was pregnant with their sixth. She had a boy to bring their family’s total to four girls and two boys.

They were a lovely family, whose names all began with the letter “R”. Roberto, Regina, Raquel, Rowena, R…., and Raphael.

A couple of years later, their cousins from the Philippines moved in with them for a few months, until they found a home of their own. This family had six boys. They called themselves the MAPSERs, because their names started with those letters. So there were now five adults (including one Nanny) and twelve children living next door.

As far as we could tell, they all got along and there was never a moment when the kids disturbed the neighbourhood. A couple of days after the MAPSERs moved in, in the middle of May, we had several inches of snow, and those boys were all out playing in the snow in their SOCK FEET!

The youngest boy had a twisted foot, so he limped when he walked. From my kitchen window, I saw the twelve of them walking to the school bus every day. One day this little boy was having a difficult time because the school bus was coming and he had fallen behind.

His cousin, Regina, looked back and spotted him limping along. Without a word, she stopped, went back to him, crouched down, and waited patiently while he climbed on her back.

I think of all of them often. I think of the boy’s surgeries and hope that they were successful and that he now walks straight and sure-footed. I think of Regina, wordlessly offering her back to her little cousin. I pray God’s blessings on all of them.

A house full of adults and children.

A house full of love.

I was privileged to see a tiny example of this, one day in Montreal.

Thank you for taking the time to read this post. Have a wonderful day. – Maureen

It was recently brought home to me that I haven’t posted for about a year. Well, I aim to rectify that, starting now.

I don’t know if any of you have experienced this phenomenon. While I was still regularly posting, I was asked by a well-known site, to contribute posts to their site, and I froze. It has taken me a long time to thaw out and that opportunity has probably dried up, but I think I can do this again. For me.

My art has been taking up a lot of my time and I have been really enjoying my acrylic paintings. I’ve done larger pieces and some very small ones. Even though I am a woman of “a certain age”, the creativity has been flowing. I did a couple of “clothesline” paintings that I really like. The first one brought back memories of my mother hanging clothes on the line, summer and winter.

In the middle of January, she would bring in the laundry and stand it up on the kitchen floor. Then of course she had to iron everything, and with a family of eleven children, it was no small task. Mom used to say that the only time she got out of the house was to go to the clothesline!

The first clothesline painting gave rise to the idea for the second, which had to do with Canada’s 150th birthday, being celebrated this year. I have even had some interest in buying that particular one, although the sale hasn’t gone through yet.

In any case, it’s not the selling that thrills me, although it would be nice, but it’s the actual creating the painting, from the initial idea, the first sketches, and the final product.

I’m not a great artist, not even close, but I can’t tell you how painting makes me feel. I just wish I had started earlier in life. My small house is full of paintings. The walls are bending under the weight of them.

Last week, we had our youngest grandchild for the day, and she and I painted together. We  had so much fun. It was a dream come true for me and she brought a very nice seascape home to show her family. Her brother wanted to buy it from her, but she wasn’t selling! 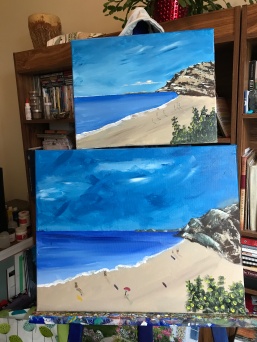 Our finished paintings. Which one was done by an 11-year-old, and which by a 72-year-old?

How are you creative?

Thanks for reading and have a good day.