When we moved here to Ottawa, on December 15, 2011, the grass was still green, the temperature was well above freezing, and a soft rain was falling. That year we didn’t see snow until a few days before Christmas and the whole winter season was milder than usual.

The coldest day of the year was the day my sister from Bermuda came to visit. The temperature that day was -25C. It must have been a shock for her! I had to lend her my long “yard-duty” coat that I had used when I was a teacher.

Last year, it didn’t snow until a few days before Christmas but Winter bit us in the derriere in March and April when we had several snow storms and the temperatures were frigid! It was very difficult and perfect strangers were talking to each other about how horrible the winter had been.

Not as bad as 2008, which set a record for the most snow EVER in one year in Ottawa.

This year, it has hit us early, and hit us hard, and while it has put us in the festive spirit and we do admit that it is beautiful, I fear we are in for another record-breaking year.

We went Christmas shopping today but were mostly inside so this afternoon we went for a walk on the Greenboro Trail. We took a few photos to prove how hardy we are.

And I admit – it was beautiful. 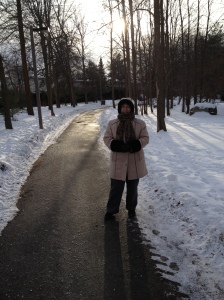 What do you think of my new WARM winter jacket? 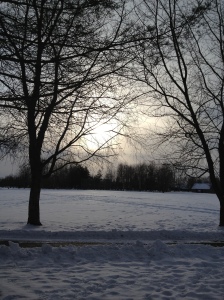 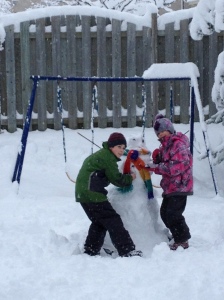 Two of my grandchildren built their first snowman of the season. 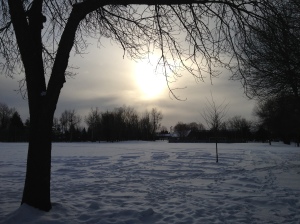 Over a week until the winter solstice and the sun is setting at 4:19.

I fully expect my Bermuda sister to comment on this post telling us how “cold” it is there, but do not believe her. We have had this discussion before and I know winter in Ottawa blows her puny Bermuda winter right out of the water!

Thanks for reading and have a great day!  Stay warm. 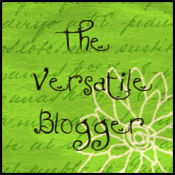