The past week has been pretty hectic with great happiness and one great sadness.  My 91-year-old mother-in-law passed away on Monday, the day after her oldest son’s 67th birthday.  She had a wonderful life and we all loved her and will miss her.

My daughter, Carla, came to Ottawa from Montreal to visit for the long weekend.  Her three boys were with her while her hubby was working on a few things around the house.  We had a blast!

On Friday evening, my grandson, Owen, had his 8th birthday.  The party theme was Wild West and the kids loved every minute of it.  Here are a few photos from the party.

Panning for “gold” at the Wild West party. 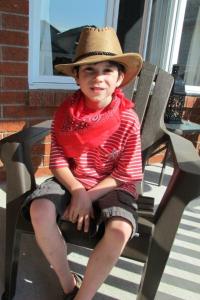 Howdy, Pardner! Welcome to my party.

Note the kid on the ground!

Owen is trying to make a break for it!

Each kid got a cowboy hat, a bandana, a bow and arrow, a camp stool, and some chocolate “money”.  A great idea.

Carla’s boys went for a long bike ride with Grandpa on Saturday morning and in the afternoon we had another party and a barbeque for Owen and Grandpa’s birthdays which are only two days apart.  The food was delicious and we were able to take home leftovers!

On Saturday evening we babysat Amelia and Enid, daughter Michelle’s two girls.  The kids played all evening and then went to Mac’s for treats.  Seven cousins and almost enough money!  They were 14 cents short but the owner let them have the treats.  We went back the next day to give him the 14 cents!

On Sunday, Grandpa took the boys out for another looooong bike ride which turned out even longer when Cam’s bike broke and they had to walk home.  They had forgotten to bring their cell phones with them!

Michelle came over later in the day and the kids all watched an old favourite, The Aristocats.  They must have seen that movie thirty times over the years.  We had bought the VHS version many years ago and had to upgrade to the DVD version a few years later. I made popcorn and snacks and they settled in.

The weekend was one of the hottest on record with the temperature soaring to 35 º C (around 95 º F).  Carla and I took a walk along the trail near my house in the early morning.  I took a few photos.

Carla on the Trail.

Some of the flowers along the Trail.

In the afternoon we went to my sister Beth’s house near Ottawa, for another family barbeque.  It was wonderful.  Two of my brothers and two of my sisters were there as well as Carla and her three boys, Monica and Nick and their two kids, my sister’s daughter, husband, two step-children, and newborn baby.  The baby is just a month old and was the hit of the party.  Brynn, my 6 year-old granddaughter, said to her mother, “Tomorrow I’m going to tell all my friends at school that I have a baby cousin.”

Before Carla left I took a photo of her Bermuda Bag, because it is a different colour from the ones I posted in “It’s All in the Bag”. 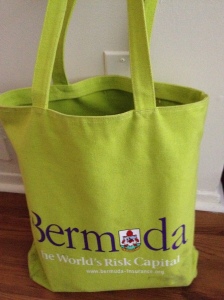 I love the lime green of this bag.

Carla went back to Montreal and Grandpa and I had a looooong nap!